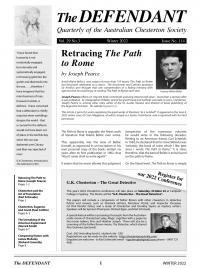 Amid Hilaire Belloc’s vast output of more than 150 books, The Path to Rome has long been celebrated as a classic. The ski-pioneer and Catholic apologist Sir Arnold Lunn thought that one compensation of a fading memory with age was that he could enjoy re-reading The Path to Rome each year.

Joseph Pearce reflects on why the book commands enduring interest and value – more than a century after it was published. As a biographer of Belloc and of his great friend and Catholic comrade-in-arms, Chesterton, Joseph Pearce is, among other roles, editor of the St. Austin Review and director of book publishing at the Augustine Institute. His website is jpearce.co.

This article is part of a series explaining the great works of literature “in a nutshell”. It appeared in the June 4, 2022 online issue of Crisis Magazine, of which Joseph is a Senior Contributor, and is reprinted with his kind permission.

The Path to Rome is arguably the finest work irrespective of the numerous volumes of literature that Hilaire Belloc ever wrote.

This, apparently, was the view of Belloc himself, as expressed in an inscription in his own personal copy of the book, written six years after its first publication in 1902, that “Alas! I never shall so write again!”

It seems that he never altered this judgment he would write in the following decades. Writing to an American friend, Carl Schmidt, in 1930, he declared that his novel Belinda was “certainly the book of mine which I like best since I wrote The Path to Rome.” It is clear, therefore, that the best of Belloc is to be found on the path to Rome.

On the literal level, The Path to Rome is simply and ostensibly a factual account of the author’s pilgrimage in 1901. Setting off on foot from Toul, in France, Belloc travels through the valley of the Moselle, heading for Switzerland and then, traversing the Alps, to Italy.

Traveling with him, mile by mile and page by page, as he trudges the 750 miles to the Eternal City, the reader sees Europe at the turn of a new century, over a century ago, through the eyes of a poet besotted with its beauty.

We see it through the lens of a historian who understands the living majesty of Europe’s past. We see it through the faithful heart of a Catholic who beholds a vision of the Europe of the Faith in which the present is seen to be in vivid and vibrant communion with the past.

This would be enough in itself to warrant our reading of the book. After all, who would not want to step back in time to follow the indefatigable Belloc, step by step, on a pilgrimage through Europe, with Belloc himself as the guide? One is tempted, indeed, to see this as a pilgrimage made in Heaven.

In terms of its formal structure and literary genre, The Path to Rome is both a travelogue and a farrago, which is to say that it is, at one and the same time, a linear narrative connected to a journey and a seemingly random dispersal of anecdotal thoughts and musings. It is animated, therefore, by the tension between the forward momentum maintained by the author’s account of his pilgrimage and the inertial force of the tangential interruptions and digressions.

Whereas the literal linear narrative represents the horizontal dimension of the work, the digressionary musings signify the vertical movement of the contemplating soul toward the things of God. This combination constitutes a distinct literary genre, and one in which Belloc excelled. Having experimented with what might be called the “travel-farrago” in the writing of The Path to Rome, he would return to it with great success in The Four Men and The Cruise of the Nona.

This understanding of the book’s formal and structural dimension does not do justice to the metaphorical and metaphysical dimensions, which transform The Path to Rome into a work of mystery and mysticism, in which Belloc, like Dante in The Divine Comedy, is transfigured into Everyman, an image and figure of all of us on our respective pilgrimages through life.

He makes and breaks vows, learning priceless lessons in the process; he loses precious possessions that he might no longer be possessed by them; he discovers an oasis in what he thought would be nothing but a desert; he suffers humiliation in order to attain humility; his pride is broken that he might be healed; the blisters on his feet become the cross he must carry. He is a much smaller man at the end of the journey than he thought he was at its beginning, and he is much closer to Heaven in consequence.

Belloc, as the archetypal pilgrim, is homo viator, whose journey toward the Eternal City of Rome is symbolic of the journey of each of us toward the Eternal City of God. In this sense, the journey becomes a metaphor for life itself, indicative of the providential connection between the experience of life and its deeper meaning, the quest for Rome becoming the quest for Heaven.

As J.R.R. Tolkien once remarked, life is a study for eternity for those so gifted.

It is no wonder, therefore, that The Path to Rome is a work of humility and awe, of gratitude and hope, of faith and love. But, like us, it is also carnal. It is incarnational. It is flesh, mystically communing with, and exiled from, Heaven but also rooted in the earth. It is pithy and earthy, anecdotal and tangential; it is simultaneously prayerfully reverent and playfully irreverent. It is a faith loved and lived within the constraints of the fallible and fallen nature of the author. And as for the author’s motivation for writing the book, Belloc inscribed in his own personal copy that “I wrote this book for the glory of God.

From the pregnant poignancy of Belloc’s superb preface, with its delightful combination of the wistful and the whimsical, to the dash and dare of the wonderful poem that serves as the book’s, and the pilgrim’s, conclusion, The Path to Rome takes the reader on a journey into himself and out of himself, a voyage of discovery in which home and exile are interwoven in a mystical dance of contemplation.

“These, the great Alps, seen thus, link one in some way to one’s immortality. Nor is it possible to convey, or even to suggest, those few fifty miles, and those few thousand feet; there is something more. Let me put it thus: that from the height of Weissenstein I saw, as it were, my religion. I mean, humility, the fear of death, the terror of height and of distance, the glory of God, the infinite potentiality of reception whence springs that divine thirst of the soul; my aspiration also towards completion, and my confidence in the dual destiny. For I know that we laughers have a gross cousinship with the most high, and it is this contrast and perpetual quarrel which feeds a spring of merriment in the soul of a sane man. (The Path to Rome, 1902)