Satire in a Disbelieving Culture

Premiere of a Chesterton Movie

Rebirth of the Catholic Novel

Chesterton and the Locked Tomb 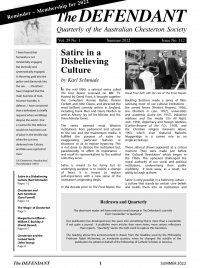 A Review of Richard Ingrams’
The Sins of G.K. Chesterton

The narrative is honest, detailing David’s military and artistic triumphs as well as his sins, administrative errors, and violent feuds—with no attempt to whitewash these failings. Yet the legacy of King David’s reign is nonetheless celebrated, its glory intact in Judeo-Christian history. There is no unrealistic—and unfair—dichotomy of perfection or dismissal.

It’s a shrewd way to view any noble figure: honest about their mistakes and whatever vices deformed them, without these admissions entirely destroying their reputation or diminishing great achievements.

I kept the Biblical biographical model in mind while reading The Sins of G.K. Chesterton, although it’s more a portrait of the Chesterton circle with Gilbert at the centre. It’s a beautifully produced book, not too long, well-written and concludes with a wealth of scholarly resources to aid further exploration.

Richard Ingrams is a Catholic convert, a journalist and cartoonist—like Gilbert Chesterton—and an admirer. He is a sympathetic biographer; his aim isn’t character assassination. He wants evidence of faults given due weight. The questions are: what is the evidence and how are we to weigh the faults?

The Sins of G.K. Chesterton is a provocative title, hinting at scandalous secrets. Basically, the ascribed sins are anti- Semitism, and weakness before the intemperate influence of brother Cecil Chesterton, Cecil’s wife Ada, and mutual friend Hilaire Belloc. These journalists worked closely with Gilbert and it seems fair to say—as Ingrams does say because many of their contemporaries and close associates said it—that they were often abrasively opinionated.

Allied with them, Gilbert in print taunted good friends in politics and at one point mocked his employer, the gentle Quaker George Cadbury, because of his political affiliations. In addition Cecil, Ada and Hilaire were genuinely averse to Jews, although this antipathy was mostly expressed through innuendo in their newspaper articles.

These three colleagues caused Gilbert considerable difficulties but he didn’t recognise them as the primary sources of his troubles. His wife, Frances, saw it but her gentleness prevented her from insisting that Gilbert manage better these periodically wearying people. Frances did what seemed prudent to protect Gilbert from their selfishness and bellicosity, but it wasn’t easy because Cecil, Ada and Belloc were family and/or long-standing friends.

Before reading Richard Ingrams’ book, I’d read two biographies of Gilbert Chesterton — Chesterton’s autobiography and Maisie Ward’s biography. I finished those books dissatisfied. Nobody could be so blithe and jolly for so consistently long as Chesterton was portrayed. Nancy Brown’s excellent biography of Frances Chesterton revealed that along with their love for each other and prodigies of creative work there were other realities: their distressing bouts of serious ill-health, their money worries; his over-eating and drinking; his and her battles with depressive episodes, and the grief of childlessness.

Also, there was the sadness of sudden bereavements. Richard Ingrams’ book enlarges and elaborates the group portrait. Belloc, self-important, doesn’t emerge well; Ada seems painful, and Cecil—sad to say—is obnoxious. Throughout, Ingrams provides a multitude of quotes, examples and evidence to corroborate his narrative and assessments.

The Marconi controversy occupies a large part in Chesterton biographies but it’s the least interesting part of Gilbert’s story. It has a key place in Ingrams’ book because it revealed prejudices. Wealthy politicians colluded to make money by insider trading and then denied wrong-doing. The fact that the politicians involved were “Anglo-Judaic plutocrats” Jews got Belloc and Cecil Chesterton excited. They thought greedy Jews were dependably loyal to each other rather than to their adopted country. Insinuating articles were published, some by Gilbert but the most outspoken pieces by Cecil. A court case followed and Cecil was fined 100 pounds for defamation. Gilbert saw the Marconi scandal as a huge betrayal of public trust—which it was—perpetrated by powerful English Jews to make more money for themselves— but their Jewish heritage was incidental.

Ingrams doesn’t shirk the unpalatable truth: in the decades ahead Gilbert, as newspaper editor, published some provocative anti-Jewish articles by Belloc and Ada Chesterton. In Ingrams’ view, Gilbert should not have printed these pieces; a view shared by friends and newspaper subscribers who wrote to Gilbert protesting the rancorous tone and absence of evidence. Why did he publish these rants?

Gilbert found it hard to manage Ada Chesterton, a pushy woman who was also his sister-in-law. After Cecil’s death in December 1918, Gilbert—grief-struck—dedicated himself to honouring Cecil’s newspaper work and public concerns. This dedication became a trap because Gilbert was not an organiser, accountant, or skilled editor.

Widowed, Ada worked hard at the newspaper but was unsuited to a senior role. Gilbert avoided confrontation, allowing too many poor situations to continue for too long; under his editorial control the newspaper struggled and staff morale was low.

Gilbert was yoked by loyalty to Belloc who could sometimes write pugnacious articles—which Gilbert published in the newspaper he and Belloc controlled. Belloc was so sure of his own judgments that he didn’t bother sifting evidence. During WWI, for example, Belloc wrote such ridiculous campaign reports that he was satirised: a pompous correspondent parading as military expert.

Both before and after the war, Belloc wrote worthwhile articles but over time their value has been undermined by his unworthy pieces, such as his 1930s articles defending Mussolini—the strong decisive leader who would clear Italy’s corrupt parliament. Gilbert—overlooking the Abyssinian invasion—likewise wrote a piece with this view of Mussolini and earned stinging rebukes from prudent friends.

Ingrams appears to agree with Bishop Doyle’s negative recommendation (after a six-year investigation by an assistant, Canon Udris) into the canonisation of Gilbert Chesterton. Bishop Doyle’s reasons for not recommending the canonical process were threefold: no local cult of devotion to Gilbert Chesterton existed; there was no discernible pattern of personal spirituality; and the charges of anti- Semitism—even allowing for the different sensitivities of different eras—blocked canonisation.

I regularly read G.K. Chesterton’s books. I don’t discern a pattern of wicked prejudice, although at times I’m stopped,

re-read a passage and conclude no one is free of misjudgement. However, by publishing—or at least failing to edit—the obvious prejudices of Ada Chesterton and Hilaire Belloc, Gilbert was complicit with their callous or foolish excesses.

In another context Chesterton observed that different eras and cultures put varying emphasis on virtues and vices. For example, in a post-Holocaust world, we are obsessed with racial and identity slurs—undoubtedly cruel—that would’ve passed without much public outrage a hundred years ago. The emphasis will change, for better or worse, because humanity finds it nearly impossible to balance right and wrong.

Ingrams doesn’t examine Gilbert’s own defence against the charge of anti-Semitism.

Gilbert said anti-Semitism was an example of thoughtless use of words. Semites were people from the Middle East— Jews and Arabs—who spoke related languages. He was not an anti-Semite: hostile to a suite of languages and people. He confessed that, if he was anti-Jewish, he would say he was anti-Jewish; honesty would compel the candour. He wrote that avarice was a particular Jewish vice, just as snobbery was a particular English vice and materialism an American vice. This didn’t mean he disliked Jews; rather he saw no point denying that different cultural groups had their different faults. He also wrote of Jewish genius in the arts, in morals and religion, saying they gave God to the world and he would die defending them. He knew that Jesus, the apostles, and the Jerusalem Church were Jews and he owed his faith directly to them.

I have no firm opinion about G.K. Chesterton’s possible canonisation, so I won’t take that stray dog by the ears and risk being bitten, as Proverbs warns. I’m glad I read (and re- read before writing this review) The Sins of G.K. Chesterton because it provides valuable information—some of it dismaying—on the Chesterton circle.

Gilbert said that sentimentality favoured one fact at the expense of other facts. It’s a mistake to build a sentimental view of G.K. Chesterton as innocent, child-like sage; it obscures his humanity and invites disappointment because we all have failings.

Following the model of King David’s Biblical biography, we celebrate what we can and admit what we must.