Lapsing into Relevancy – the Art of the Essay

Ronald Knox and the Cultural Credibility of Christianity

The Chesterton Novel for Spies 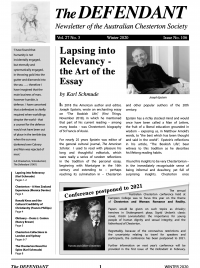 Lapsing into Relevancy – the Art of the Essay

In 2018 the American author and editor, Joseph Epstein, reflected on his lifelong reading habits, highlighting various principles of evaluation that are remarkably Chestertonian, including the ways in...

Monica Devine, a wife and mother who manages a family law practice in Wellington, New Zealand, recalls her accidental discovery of Chesterton and describes her efforts to promote...

Ronald Knox and the Cultural Credibility of Christianity

The distinguished Chesterton biographer and editor, Denis J. Conlon, died on May 7, 2020 at the age of 88. Nancy Brown recalls the range and importance of his...

This report highlights two Chesterton collections – one at the University of Notre Dame’s campus in London, the other at Campion College Australia in Sydney - and outlines...

The Chesterton Novel for Spies

Chesterton’s 1908 novel, The Man Who Was Thursday, has attracted wide appreciation over the past century, but has recently been found to be popular among professional spies. Karl...