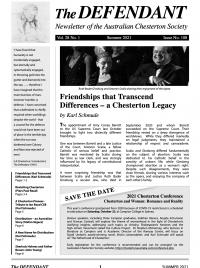 Can friendships transcend differences, and stop arguments becoming quarrels? Karl Schmude invokes Chesterton as a model for dealing with this challenge.

The distinguished British author Piers Paul Read recalls the surprising coincidences between his life and Chesterton’s in a review of Ian Ker’s biography of Chesterton.

Australian Chestertonians join the chorus of applause and gratitude for the singular contribution of Fr Ian Boyd CSB, founding editor of The Chesterton Review, to the growing appreciation...

Stefan Gigacz of the University of Divinity, Melbourne, reviews Race Matthews’ Of Labour and Liberty - Distributism in Victoria 1891-1966.

Dale Ahlquist, President of The Society of Gilbert Keith Chesterton, has proposed ‘Localism’ as a new name for Distributism.