Laughter in the Service of Truth – Bruce Marshall 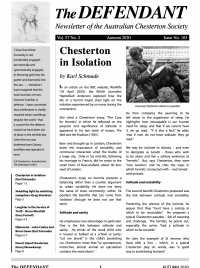 The English feature writer and book reviewer for the London Catholic Herald, Francis Phillips, pondered – in her April 24, 2020 blog – the significance, in a different cultural era, of the beliefs of the English Catholic apologist, Msgr Ronald Knox (1888-1957). Her article is reprinted with her kind permission.

Having discovered it in a pile of books I have been reorganising, I have been dipping into Ronald Knox’s A Spiritual Aeneid (1918), the account of his spiritual journey from High Anglicanism to Catholicism.

Knox converted in 1917, influenced both by Robert Hugh Benson, himself a convert and the son of an archbishop of Canterbury, and G.K. Chesterton, a convert some years later. When Knox died in 1957, his first biography was written by his friend Evelyn Waugh, another famous convert.

What struck me about the world that Knox describes at the outset of the 20th century is that Christianity was taken with entire seriousness by educated people.

Knox, a brilliant classicist both at Eton and at Oxford had grown up in an Anglican milieu; his father later became bishop of Manchester. He writes that at Eton, “I seem to have accepted a supernatural religion without trouble or speculation at this period.” This meant belief in “the Blessed Trinity, the Incarnation, the Life, Death, Resurrection and Ascension of our Saviour, Heaven, Hell, and the forgiveness of our sins only through the atoning merits of the Precious Blood.”

In a much-quoted passage at the end of his book, Knox describes his journey from Anglicanism to the Church:

“It was as if I had been a man homeless and needing shelter, who first of all had taken refuge under a shed at the back of an empty house. There he had found an outhouse unlocked, and felt more cheerfulness and comfort there. Then he had tried a door in the building itself … [and] had visited this back part of the house, more roomy than anything he had yet experienced, and giving, through a little crack, a view into the wide spaces of the house itself beyond…. Unable now to content himself with shed or outhouse, he had wandered round and round the house … and then he had tried the front door, and found that it had been open all the time.”

Earlier this century, the prize-winning novelist Hilary Mantel described Catholicism as not for “respectable people”. What has happened in the last hundred years for the Faith, once intellectually respectable enough for brilliant and creative minds like Knox and Waugh to find their home in it, to have come to this pass? That is, to be dismissed without challenge by a prominent historical novelist like Mantel – and otherwise largely ignored by the intelligentsia?

If the BBC, the UK’s national broadcaster [Ed: and Australia’s ABC] is anything to go by, Christianity is irrelevant where it is not suspected of moral scandal.

American poet and critic, Dana Gioia, has asked the same question in his thoughtful essay “The Catholic Writer Today” (2019), which is his opening article in a collection that includes studies of poets such as GM Hopkins and Elizabeth Jennings.

As in the UK in the mid-20th century, Gioia describes a strong Catholic presence in poetry, criticism and literature in the USA, citing names such as Flannery O’Connor, Walker Percy, Allen Tate and Robert Lowell.

As Gioia points out, not all such writers were necessarily practising Catholics (Graham Greene certainly wasn’t) but they did share a general “Catholic world view” that was both coherent and artistically fruitful: that we live in a fallen world; the need for grace and redemption; that evil is real; that nature is sacramental; and having a grasp of a long historical perspective.

As he remarks, contemporary culture is secular. One might describe it as ahistorical, narrowly rational and dominated by relativism: you have your truth, I have mine.

According to Gioia, the collapse of Catholic literary life “reflects a larger crisis of confidence in the Church, that touches on all aspects of religious, cultural and intellectual life”.

Somehow, I see this reflected in our UK Bishops’ immediate closing of all churches and sacramental life when the current lockdown began. It gave the (false) impression that this sacramental life and the sacramental world-view lying behind it are not vital to us Catholics; indeed, an acceptance that our beliefs are on the margins of society, dwindling in importance compared to the National Health Service, our alternative “religion”.

Whether as poets, creative artists, intellectuals or ordinary members of the Church, we need to find ways to make Catholicism respectable again, as it still was in the mid-20th century world of Knox and Waugh. It starts with confidence in what we believe.