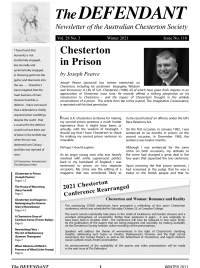 The American Catholic evangelist, Bishop Robert Barron, founder of the Word on Fire Ministries, is an ardent fan of G.K. Chesterton.

A gifted preacher who blends eloquence and a natural style with intellectual cogency, he picked Chesterton as among the most influential figures in Christian history, devoting a full episode to him in his initial six-part DVD series of The Pivotal Players.

Bishop Barron has spoken and written about Chesterton’s life and writings on many occasions. Most recently, he highlighted the central insight of Chesterton’s social philosophy of Distributism – that power in society should be as widely distributed as possible, as the best guarantee of freedom, economically, politically, religiously, culturally.

In an article in the online American magazine, The Dispatch (January 5, 2021), the Bishop gives a compelling explanation of Catholic social teaching on power. He echoes Chesterton’s famous answer to George Bernard Shaw about the meaning of Distributism – and the profound fallacy of socialism. Shaw, Chesterton said, wants to distribute money among the poor. “We want to distribute power.” (Maisie Ward, Gilbert Keith Chesterton, 1944)

While Distributism is commonly defined as favouring a wide distribution of property and ownership, Bishop Barron broadens its application to the other spheres of culture.

He acknowledges the economic concentration of power, where monopolies can control prices arbitrarily, hire and fire unaccountably, and block any competition that might offer better products and fairer wages. But he singles out the new social forms of concentrated power that have arisen in the area of high-tech communication, as Google, Facebook, Amazon and other conglomerates exercise virtually uncontested dominance.

He also points to the dangers of concentrated power in the political realm. The ascendancy of a single party in a nation, a state, a city, or a community almost inevitably leads to corruption of various kinds. While this kind of arrangement is obvious in oppressive states, such as banana republics, communist dictatorships, and enclosed theocracies, it can also prevail, to a lesser but still worrying degree, in local and state governments in the democracies.

Why, for example, the Bishop asks, are pro-life candidates in such American states as Illinois, Massachusetts, or California, highly unlikely to be elected to office? When a political monopoly is linked with economic power, the corruption and curbing of freedoms becomes even deeper, and more intractable.

How can such alliances of power be broken up?

“equipping a variety of parties, providing for a greater turnover within legislatures, lifting up various expressions of local government, allowing for mediating institutions [such as the family and community associations], and strengthening the system of checks and balances.”

The Bishop’s special updating of the Distributist philosophy is his insights into the cultural arena. He sees how a form of cultural dictatorship is now prevailing. It is transmitted and reinforced by the new communication channels (such as Google and Facebook), and reinforced by political and economic power (such as major companies promoting various expressions of “political correctness”) – all of which make the convergence of influence even more pervasive and overpowering than any previous forms of control.

Bishop Barron notes the strict censorship of the arts in many Islamist states and in communist China, but his new emphasis on our own society is timely. He sees the degree of cultural monopoly that now applies in the West.

Not a brutal state censorship, as such, but nonetheless a definite ideological domination. This represents a monopolisation of social and political power, and effectively excludes any rival expressions of the perennial truths which the culture once held sacred – of the good, the true and the beautiful.

When speaking of Distributism, the Bishop looks to what he calls “a vivid narrative presentation” of this social philosophy in Tolkien’s Lord of the Rings, which pays “particular attention to the manner of life in the hobbits’ shire in contrast to the political and economic arrangements in Mordor.”

Finally, Bishop Barron makes clear that the fundamental perspective of Catholic social belief about power – and the need for power to be dispersed, not concentrated and centralised – is that it is not connected with either the extreme left or the extreme right.

It rises above the present political categories and divisions. It advocates, as he notes, “neither statist control nor individual freedom run amok.” It holds out, as an enduring ideal of freedom and justice, “a wide and just distribution of economic and political power.”